Where Birds Go to Sleep is a narrative adventure game set in a fictional Near East-inspired land, brought to life in a painterly artstyle, with voice-acted dialogue and original score.

Slip into the subconscious of Cormo, a churlish smuggler-turned-explorer, only ever influencing his actions, never directly assuming control. You will mould him through every sentence you put in his mind… but you might not like what he becomes.

Confront him about controversial topics like sexuality, prejudice and morality, and change his mind… or have him change yours.

There is no “Mission Failed”; saying “No” opens new avenues. There is no golden path.

Lie to others, and you’ll be more likely to hide the truth from yourself. Fail to justify your actions and you might find your character not heeding your commands.

Every single small choice you make builds up, and shifts the direction of the story. While there are crucial moments and big decisions to be made, it is the small things that – true to life – ultimately decide who we are.

Reflect on your actions along with the protagonist; exchange your thoughts on what happened; regret or rejoice, grieve or laugh together… or independently of each other.

The difference between saying “you tried your best” and “you’re horrible” is empathy.

The smallest of your choices are remembered by the experimental Insight System, which analyses your character and offers you personalised, interesting viewpoints and alternative outlooks on the things you’ve said and done, recontextualizing your experience both in and out of the game.

An island has appeared in the distant sea...

Sneak your way into a dangerous expedition to explore that island, reserved only for the worst prisoners. Get to know a handful of very special, deeply developed and fully realised characters. Become their friend, get to know their secrets, manipulate or abuse them to your, or Cormo’s will.

One of the first characters you will meet is Dunlin – a noble-born, young man who is steadfast in his moral and religious principles. But what must a purebred like him be guilty of to end up here with you?

Sprawling, naturally flowing dialogue: react in intense back-and-forth conversations. Every dialogue is ready for the choices you make, and can potentially branch off into a completely different conversation with game-changing significance.

Explore the mysterious island, unravel its secrets and lies. Shrouded in noxious, mind-altering mist, you must prepare for every journey inland, anticipating the challenges ahead. The provisions are scarce… but the others need them less than you.

Is Where Birds Go to Sleep a text adventure?

Where Birds Go to Sleep is not a text adventure. It is an adventure game featuring graphics akin to those seen in the trailer with fully voice acted dialogue, sound effects, ambience and music.

Will there be localisation to [language]?

Where Birds Go to Sleep is likely to release with only English, but we are keeping an eye on wishlists and interest from different regions, and will strive to localise the game accordingly post-release.

Will there be Linux support?

Unless we run into major platofmr-specific issues, we would like to release a Linux version in parallel to the Windows version on Steam. 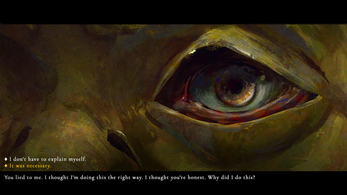